I had one of the most interesting dates yet this last week – I spent the entire night with Mr. Jamaica riding around in his work truck, which just happens to haul 40’ containers. We went all over the Greater Toronto Area and I really enjoyed spending the time with him. Not only is he super cute to look at, I am very comfortable with him, and he’s quite funny. I also love the way he says “oh my god,” which sounds like “oh my gaaaaaaawd.”

Towards the end of the night we pulled over to an abandoned motel parking lot and had amazing sex in the back of the empty container. This is also going on my list as one of the most unusual places I’ve screwed! 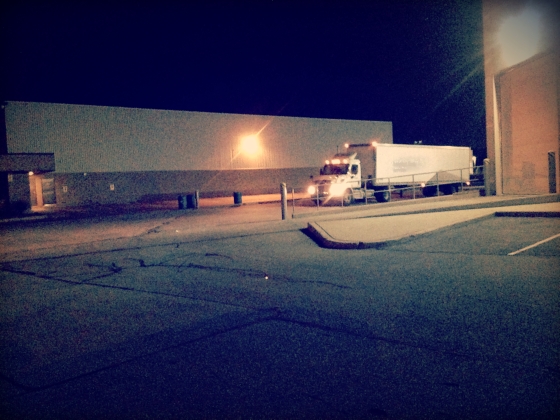 I had one of those nights where my intentions were good but things went downhill quickly.

I may actually regret even posting this, but here goes anyway.

A 24-year-old man text messages me – let's just call him Mr. Young, because, well….duh. Anyway he's attractive, sweet, asks me to meet him. My plans with Mr. Jamaica fell through so I said “why not?”

We went out and played pool. I was having fun, it was just a low key night and it was more fun than being at home watching a movie. He kept touching me….and then he kept kissing me. By the time we were done 3 rounds of pool we were practically making out on the table. So we leave, and as he's driving we pass a strip club and decide to go in. We only stayed for about 5 minutes though because we couldn't keep our hands off each other and clearly we were going to sleep together so why not just go do it already?

We head back to his place, which was a total bachelor pad in the worst way possible. We get it on. It's pretty good. He kept saying how he couldn't believe how beautiful I was, as though he's never seen another beautiful woman. I don't know who he's been sleeping with but regardless that was a nice touch on his part. There were some mishaps that I'll keep off the world wide web and will just share with very close friends, and despite that I can't say I wouldn't sleep with him again because I didn't intend to sleep with him the first time around.

I think he was put off when I left right after. There was no cuddling….I just don't really do that. Maybe younger women do, I don't know? He was intent on “taking care of me” and his approach reminded me of what Mr. Dreads says about black men from the States – they have an almost arrogant confidence.

But whatever, I got what I wanted from it.

So this guy randomly messaged me on one of those social app networks that you download to your phone. I think it was Tinder, but I could be totally wrong about that.

I thought I would have a little fun with him but it didn't go exactly as planned and I ended up just being creeped out instead of amused.

I don't know what was up with me last night.

I could not sleep. I just wanted a man near me, on top of me, inside me. It's all I could think about.

Usually I can just turn that part of my brain off and put my focus elsewhere. Nope, not last night. Everything was reminding me of sex and how much I wanted it.

And also how much I wasn't getting it.

Unfortunately for me Mr. Dreads was out of town and even if I had been free to sleep with whomever I choose I don't know if I would have. Mr. Spice would have been the first call, but really is it worth the inevitable drama? He already thinks he owns it despite not having access to it for months. I don't need to be reconfirming his belief, do I?

Mr. Rasta would have been my second call, but that has the potential to be disappointing since it would be the first time. Don't get me wrong, I love the “newness” of first times – they are shiny and happy and full of potential. They can also be a huge letdown. And even at their best there is still a learning curve to be overcome – how he likes to move, preferred positions, how we move together and acclimate to each other. It can be a lot of work.

I wasn't interested in work. I just wanted to get laid.

Everything birth, babies, and breastfeeding!

Your Toronto Doula
Catching Life: The Birth of a Midwife

“Never be afraid to trust an unknown future to a known God.”-Corrie Ten Boom

The Gift of Gavin

Life through the eyes of a grieving mother.

The complete guide to index investing in Canada

Reflections on the beginnings of life

The Ugly Truth About Pregnancy

A journey to becoming a mum